I recently listened to one of the earlier podcasts by Dave Asprey (the Bulletproof Executive) on heart health where he interviewed Dr. Joel Kahn, a cardiologist and author of the best-selling book, The Whole Heart Solution. Dr. Kahn is a well-recognized clinician in the field of invasive, interventional and preventative cardiology and was awarded the title of “America’s Holistic Heart Doc” by Reader’s Digest. He is a Clinical Professor of Medicine at Wayne State University School of Medicine in Detroit, MI and the Director of Cardiac Wellness.

It was interesting to hear that Dr. Kahn is a low-fat vegan (which is something Dave Asprey is not a fan of for various reasons) and in this interview, he mentioned that when dealing with patients with cardiac artery disease (CAD), a mostly vegetable and low fat diet (oil free, not fat free) has been proven to help. Note that he didn’t advocate this necessarily for prevention but for treating severe CAD patients.

Here are some key highlights:

His book Whole Heart Solution can be found on Amazon: 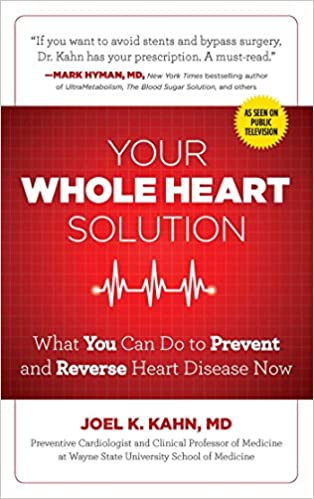 You can find the podcast here: